The thing is Railway Modellers don't see themselves as Artists.
They don't see themselves as Carpenters, Electicians, Negotiators, Researchers, or really as anything rather than 'just modellers'.
However for the learn-ed amongst us, we know the truth! We are all of the above. Sure our level of capability will be different, but the fact remains that we are in a hobby that goes across many different skill sets. I find it interesting that there are many out there that seem to specialise in one particular facet of the hobby. I believe we need a very balanced approach to gain a level of enjoyment, and indeed success, at what we are trying to create.

For me I thoroughly enjoy the scenery part of layout construction. That starts with the backscenes painting, in my method of construction. It works in with the scenic boards we put up on the front and rear of our layouts, so I always have these installed at least before moving onto some painting. Some of you may wonder why front and rear scenery boards? I've had to go down that road as I will need to remove the backscenes for ease of transport.

A reminder here also that as the layout is for show display the backscenes needed to be light, tall and easily locked together. Starting with the lightness I built a timber frame out of 19x40mm pine, with a centre bracket. The timber sits on its slim face, so that it looks similar to a picture frame, and enables plenty of meat in the joins to keep it square. As far as locking together goes it is fairly basic. At each end of the central board I've attached a piece of half round trim. It's diameter is half of the thickness of the pine frame. That way I attach two ends on the centre board to line up with the front of the frame, then on the other two boards I attach the half round to the rear. The idea being that they would lock against each other when bolted in place.

Then I've used calico purchased for painting the backscenes on. It is a simple task as long as you follow a couple of basic rules. The first being that attaching the calico starts in the centre of the longest sides, on both the top and bottom of the frame. You then work out from the centre to the ends, using cut tacks to secure at least a double fold over of the calico. The tacks are secured on the rear of the frame. Once all sides are secure you can do either of two things. If you've put on the calico with no effort in keeping it taught, then your next job is to shrink the calico to the frame. You will need a water sprayer and a hairdryer. Fill the spray bottle with recently boiled water, spray it on the front and rear of the calico, then dry it as quickly as you can with the dryer. The result should be a taught canvas ready to receive your paint.
There is a second choice, that being as you tack the calico in place, you do it whilst keeping it taught.
So after completing either way you will need to undercoat the calico, then after drying you are ready to go. I should also mention the the calico will shrink a little as the undercoat dries.

In my last post I put up a photo of the backboards attached, and here's another, a panoramic to get all three modules in. You can see the scenery boards attached to the front and rear of the modules. Whilst I had these all together I did use a pencil and mark the outline of the boards against the canvas, ready to paint now and with a guide as to how far down to paint.

Note also the way the boards sit together without being able to see through between then, the curse of a modular layout.
We are almost to the paint, but we need to decide just what we are going to paint, and how we do it. I approach this part as a series of smaller parts, building on the last. That way I'm able to do a bit when I have time, and I'm not locked into having to have a large block of time just to be able to complete a

project. Little wins along the way help to keep us feeling good about our hobby/progress, and that in
turn keeps us motivated. How often do you hear about someone that's done something, taken them ages, and they've not been happy with the result? Probably all of us, that's why little wins is the way forward.
I paint the sky and clouds in stages. A photo here will help. 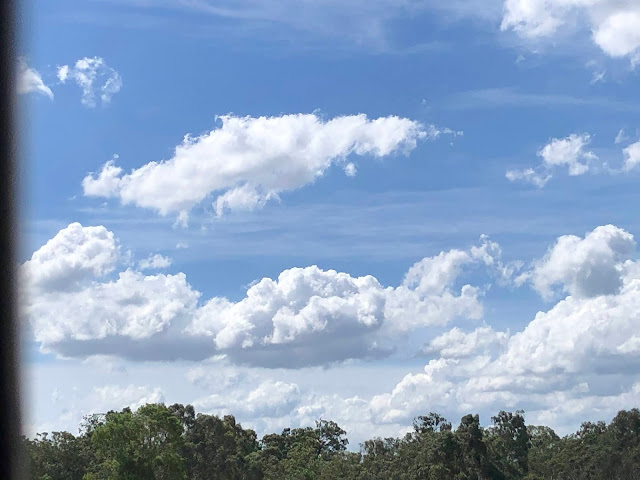 Before any clouds wispy or fluffy, are even thought about starting there is the blue of the sky behind them. All of us will have a way of approaching this, mine is to start in the 'back' and work to the 'front'. So simply put,
1. Sky background from top a deep blue to bottom a lighterblue.
2. Wispy bluish, not white clouds added next, noting how they are almost a solid colour to the left hand side lower part of the photo, but on the right the lighter blue is visible on the tree line.
3. Rear of fluffy clouds added, then more front clouds added only after rear ones are dry.

Make sense? This is to suit my layout too, so I want some depth in the photo in the sky. The
foreground, trees or mountains will change depending on what you are trying to copy.
In a previous post I put up this next photo, and it gives you an idea of what will happen behind the Station, but that's only a small part of the new layout. 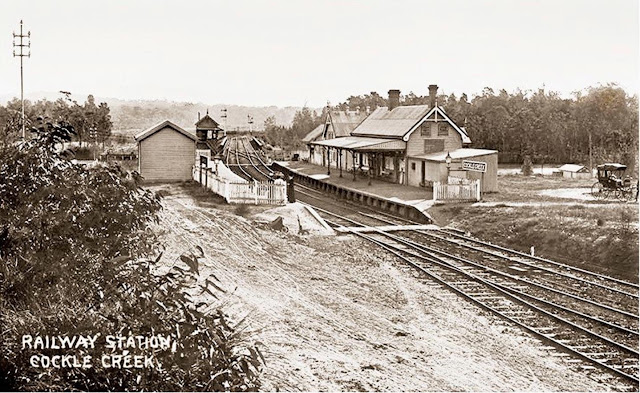 The left hand module on the layout is mostly scenery, so it will have a more distant focus, as can be seen in the next photo. 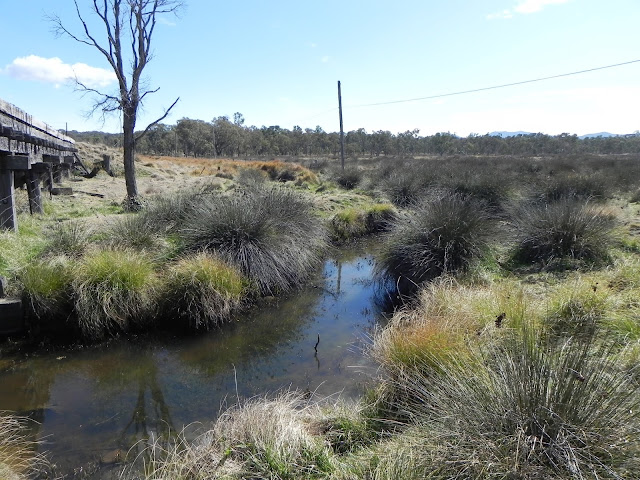 It's quite a different look to the Station area, but I wanted to create a very different look for the left hand end of the layout. It will be fun bringing it all together.

So the clouds begin with the blue sky first, so we will start there.
Enough to digest for today I think,
Enjoy your week,
Be kind to yourself,
Ooroo!
Geoff.

Today I thought it worth making a start on the next project, that being the Station building. There is still a little to be done on the Telegraph & Post Office, unfortunately I'm waiting on some parts to arrive in the mail before I can paint and weather it and call it done.
The Station is essentially three buildings linked by covered walkways, so I've decided to build it in three separate parts. The centre is the main building, the second with the lamp room and walkway, and the third the Gents toilet and walkway. I spent a little time with the scanner, and changing the percentage change from the scan, to a scale sized plan. A little bit of time, and some calculations, and a scale sized plan is the result. 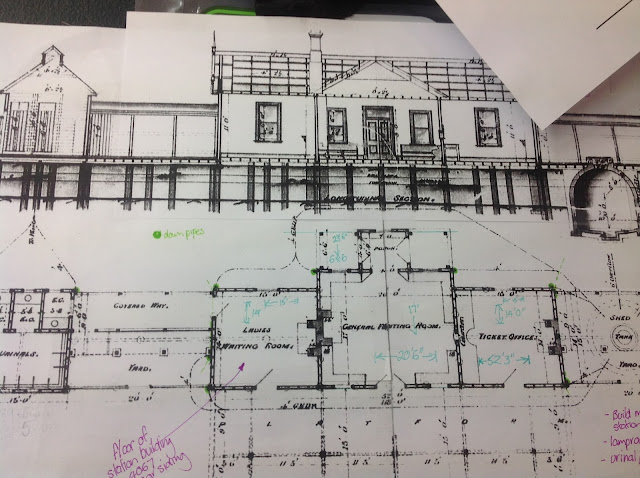 The local hobby store closed near me the other week, so I had to go back to another one I've refused to go to as the stock levels are so poor, and the staff, ordinary at best. How they survive and the local with fantastic prices, service and stock levels failed, I've no idea. To my surprise .040" styrene was not available. I did pickup a car siding sheet that will do the same. I was informed tha stock levels were a result of covid19, we shall see.

I began by drawing up all the walls in the elevation on one sheet. The beautiful part of the siding is that it makes it easy to count boards and make all of them the same height, across all the elevations.
I must admit there's been a little head scratching when taking into account the thickness of the siding, and then adjusting the width of the elevations required.


,
Then there's the addition of the roof profile to allow for when cutting the elevations out. This is all pretty straight forward stuff, but I think if I'd had a little more in the way of suggestions of how lto build a styrene building from scratch I would have saved plenty of time, bandaids, and extra sheets of styrene purchased. So if there happens to be someone out there who's not giving this scratchbuilding thing a crack, please, leave me a message and let me know what you'd like to build.

The windows have been cut, and trial fitted. The lower part to this photo shows the trackside elevation sheet, that will be needed soon. It measured and fitted beside another roofline cutout from a previous project. 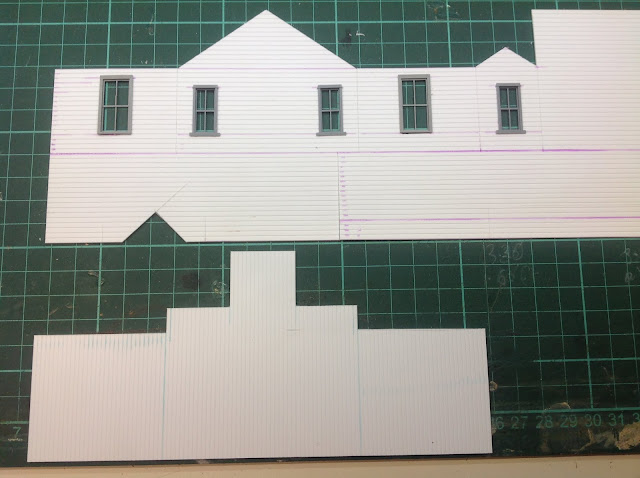 The floor has now been cut out in some fancy scribed siding, and you can see the busy street side elevation, to the plain flat rail side elevation. The central room will have internal walls to help keep the model square and to provide a solid base for the roof. This building will be a little more complex than the post office, however the principals are the same, and it can be broken down into smaller tasks that all fit together. This has quickly become the method I return to, as I find it easier to complete steps or mini projects to help keep moving things forward.

That may do for now, hopefully there will be some modelling progress this week. I've a few other things on the go at the moment. There's the painting of some figures, I've been inspired by a recent article in the 'Australian Journal of Australian Modelling', well worth supporting this Australian
manufactured magazine, for the modeller that wants to learn/do more. Then there's the progress on the backboards, maybe a photo here. 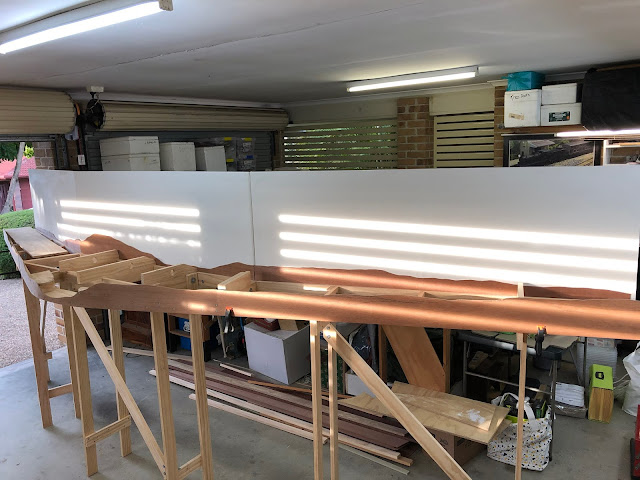 So you can see, things are moving forward, a couple of projects at a time.
Have a great week,
Hug those who matter,
Ooroo!
Geoff.
Posted by Geoff at 4:26 AM No comments: