There's been a little more time of late to spend some time out in the trainspace. I use that term, 'trainspace' very deliberately, as it is a double carport, with aluminium slats down either side to aid in security, but there's no dust removal at all. In one side is a car, in the other side are various bits and pieces of bric a brac, and discarded furniture, even a motorbike, and squeezed amongst all that is my hobby space. The extra time has been helpful in reducing the number of non railway related equipment, however there is more to do in that space.
The area I have to work in also must accomodate the three scenery modules, legs, and backscene boards. There are three scenery boards to work on, each one about 1700mm long and 600mm high. Luckily I have a shelf area that is at a good height to sit the boards on to begin the painting, squeezed in just in front of H's car.
The blue paint that is graduated down with the addition of extra white and some pale blue colours.
The subtle colour changes are a little harder to replicate than I thought. Through a few videos I've watched on youtube, I've changed what I was doing, and how I was applying the paint. There are many to watch, so choose carefully, some could send you to sleep in minutes!
The clouds themselves have been a bit of an issue, as I've not been happy with some previous incarnations, so there are a few extra layers of paint. I'll jump straight to where I'm up to, with a photo to show you a bit of progress so far.

In this photo you can also see a couple of blue lines toward the bottom that will eventually be the horizon line and the higher one the limit of background foliage.
I have taken so many photos of clouds, with the look I was aiming for. The reality of what my actual ability to paint, compared to those photos is, I guess, the reason so many people buy a photographic backdrop. Anyway I've received some very helpful feedback, that has enabled me to improve what I have been doing, to those that offered constructive comment, thank you! 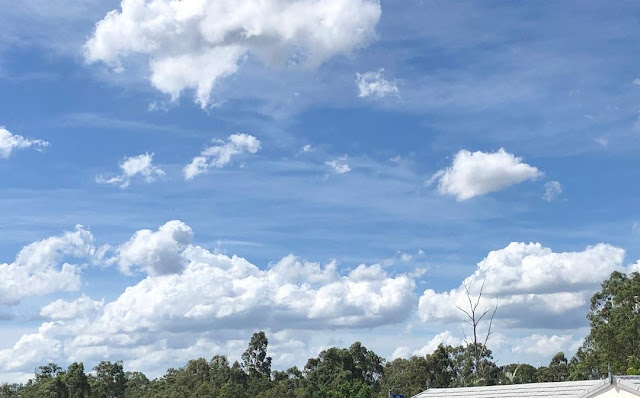 Above, is a photo I referred to as I attempted to paint some clouds. The difference between ability and reality is rather large.
The clouds are mostly done on this canvas, so its on with some background trees. I've thrown around various shades of olive green paint, darker in the rear, then a few highlights over the top. It is nothing too involved, as a fair amount of them will be covered by some of the foreground trees that are going to be just behind the Station area. My thought was to have the background fairly close at the Station, then as you move towards the left of the layout, the horizon moves further away. We will see how that ends up. 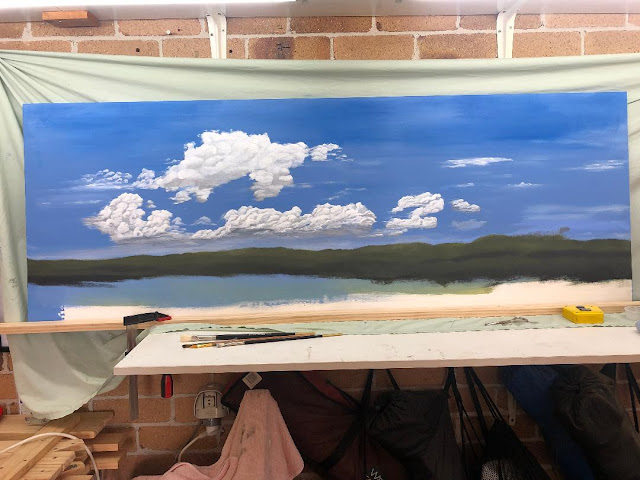 Above you can see the first layer of background trees going in. Yes it is just a few layers of various greens.
On top of this, below, you can see the start of the trees in the area behind the Station. 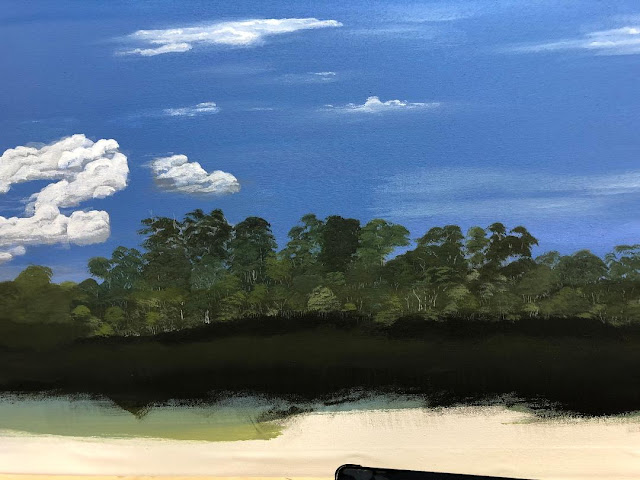 I have tended to do an area at a time, that way it doesn't all look the same as if I'd gone straight across the whole of the background with the same colours. This is just something I do, also with my scenery, so there is variation. The one thing I have to be careful of is not making the colours too 'muddy', the trick seems to be to mix the colours on your tray rather than on the end of the paintbrush.
The posts have been a fair way apart, so I might stop it there for now, after all there's still alot more to do!
Have a great week!
Oorroo!
Geoff.
Posted by Geoff at 7:25 PM