How do we run a layout during a show?

You've made the time to go out, probably for the day. You may well be by yourself. You may be meeting some friends there. It's been ages since you've been to a Model Railway Show, so expectations are high, a little bit of nervous energy as you wait to pay your entrance fee...then you are in!

We've all been there, we all look for something different. That the hard part really, as everyone does have a different idea of how to present a layout.

I have a few pet hates, these are not directed at anyone, I swear! My biggest peeves, in no particular order:
-Locomotives working so far above scale speeds.
-Inattentive layout presenters.
-Rollingstock from different locations, run together.
-A mix of weathered, and non weathered rolling stock.
-Layouts not being run until a defined closing time.

Yes I know the flood gates will probably open, sorry.

So what to do about it? Well in this covid 19 time that we live, I've had a little free headspace to have a think about it. I think we should have a dialogue about what we would like to see, and how we would do it. 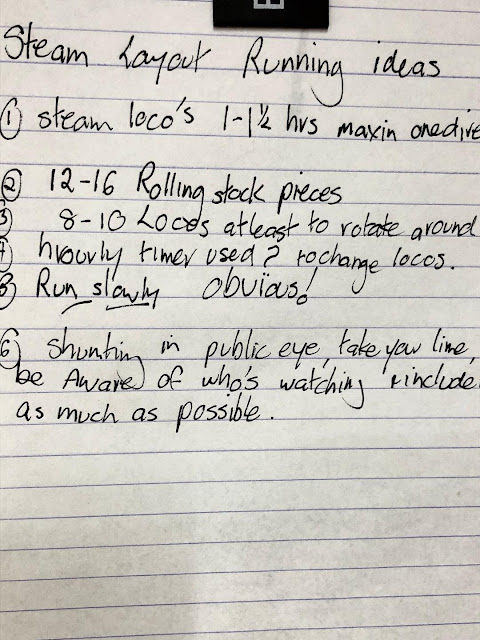 Here's a few chicken scratchings that I put together. I will be running steam on HH, so that's the focus. What have I missed? What about a set program that you have as a roster for the day, so that those who are interested will make the time to return?
I, personally would like to see that. It would even work for Club layouts, say with steam 10-12, diesels 1215-1230, you get the idea. You could even have more detailed information like the movements of trains, or locations and a rough idea of what that would mean.

I've always wanted to give people a reason to stop, to linger, that way they feel more comfortable in asking questions. If someone turns up at your layout, and they are the only one, then in my experience if you don't give them a reason to stay, to be comfortable, then they will move on, with many questions left unasked. Railway Modellers are for the most part loners, there aren't too many that are resilient enough to stand in front of their community and share their efforts. Those who aren't presenting, tend to be the quiet ones, easily startled, you get it, si?

When I had Splitters, I had created a 'history' for the location, with details of rollingstock and what was transported on the line. I was then faced with people wanting to go and see what was still there. So then I added a sheet of the explanation of what I was trying to achieve in my Proto-Freelance modelling efforts. So people are prepared to stop and read, let's use that and give them a reason to pause out the front of your layout.

We've all had quite some time away from shows this year, and what have you learnt about our hobby during this down time? I've had time to re assess what we do, how we do it, what matters, and how we present it to the public.

If you have some opinions, please, share them. I'd love a discussion about what we do, could do, or should do.

Have a great week, live in smiles,
Ooroo!
Geoff.
Posted by Geoff at 4:54 AM